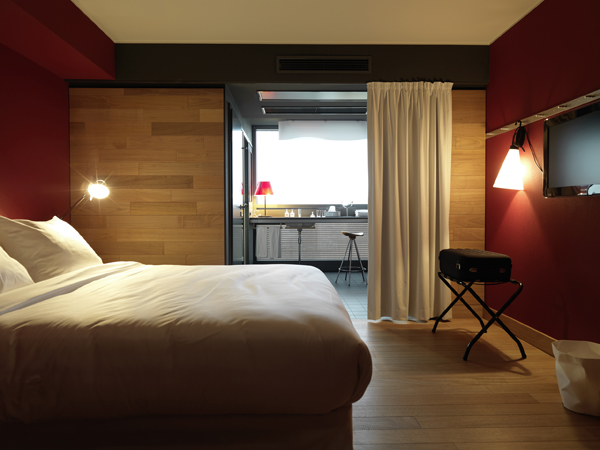 The Casa Camper Hotel has just opened in Berlin’s Mitte neighbourhood, a new building designed by architects Fernando Amat and Jordi Tió. “Tentempié” – a buffet bar open for lunch and dinner witha fine view of the German capital- is situated on the top floor of the monochromatic eight-floor building, whereas at street level “Dos Palillos”, a restaurant designed by the Bouroullec brothers, has recently opened.

Light has been a determining influence in Fernando Amat and Jordi Tió’s design of the Camper hotel in Berlin, not only in global terms but very specifically with respect to the distribution of space; hence, in the hotel rooms, the bed is situated towards the inside, whereas the bathroom area is on the façade overlooking the city and protected by large glass windows that allow sunlight in. At the same time, a theatre stage effect towards the outside is generated as shadows are projected intuitively perceiving what is happening inside. The façade “resembles a machine, all grey in colour (…), Monochromatic due to the sole presence of zinc, not often used in Spain although a material of great tradition in Germany”, says Amat. Ronan and Erwan Bouroullec have designed a restaurant on the bottom floor that very much resembles the large kitchen tables of their childhood memories in the French region of Bretagne. The space is conceived as a theatre where the kitchen is at the centre evoking a stage to invite up to 30 guests to enjoy the show provided Albert Raurich – previously chef of the “El Bulli” restaurant for 11 years- and his 10 cooks. The French designers have been searching for a new culinary experience where interaction and visual contact do not end within the restaurant space, inviting passers-by to take part in the performance through large glass windows. 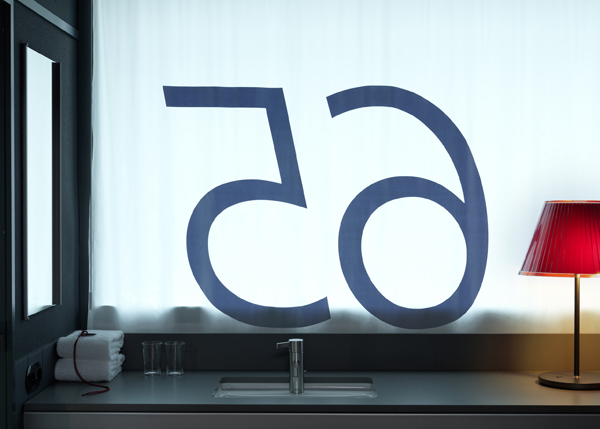 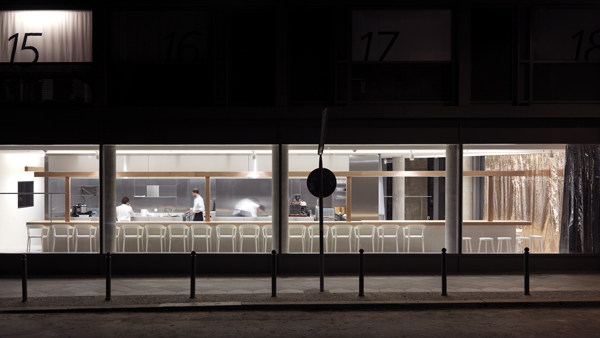